The National Unified Operational Prediction Capability (NUOPC) is a consortium of Navy, NOAA, and Air Force modelers and their research partners. It aims to advance the weather prediction modeling systems used by meteorologists, mission planners, and decision makers. NUOPC partners are working toward a common model architecture - a standard way of building models - in order to make it easier to collaboratively build modeling systems. To this end, they have developed the NUOPC Layer that defines conventions and a set of generic components for building coupled models using the Earth System Modeling Framework (ESMF).

The NUOPC Layer is included with the ESMF distribution. No separate download or installation is required.

The four basic building blocks can be arranged in many different ways. This allows applications to implement a wide range of model architectures, including ensembles, component hierarchies, and simple connections.

A typical sequence of initialization phases is shown in the diagram below for the coupled ATM-OCN model. 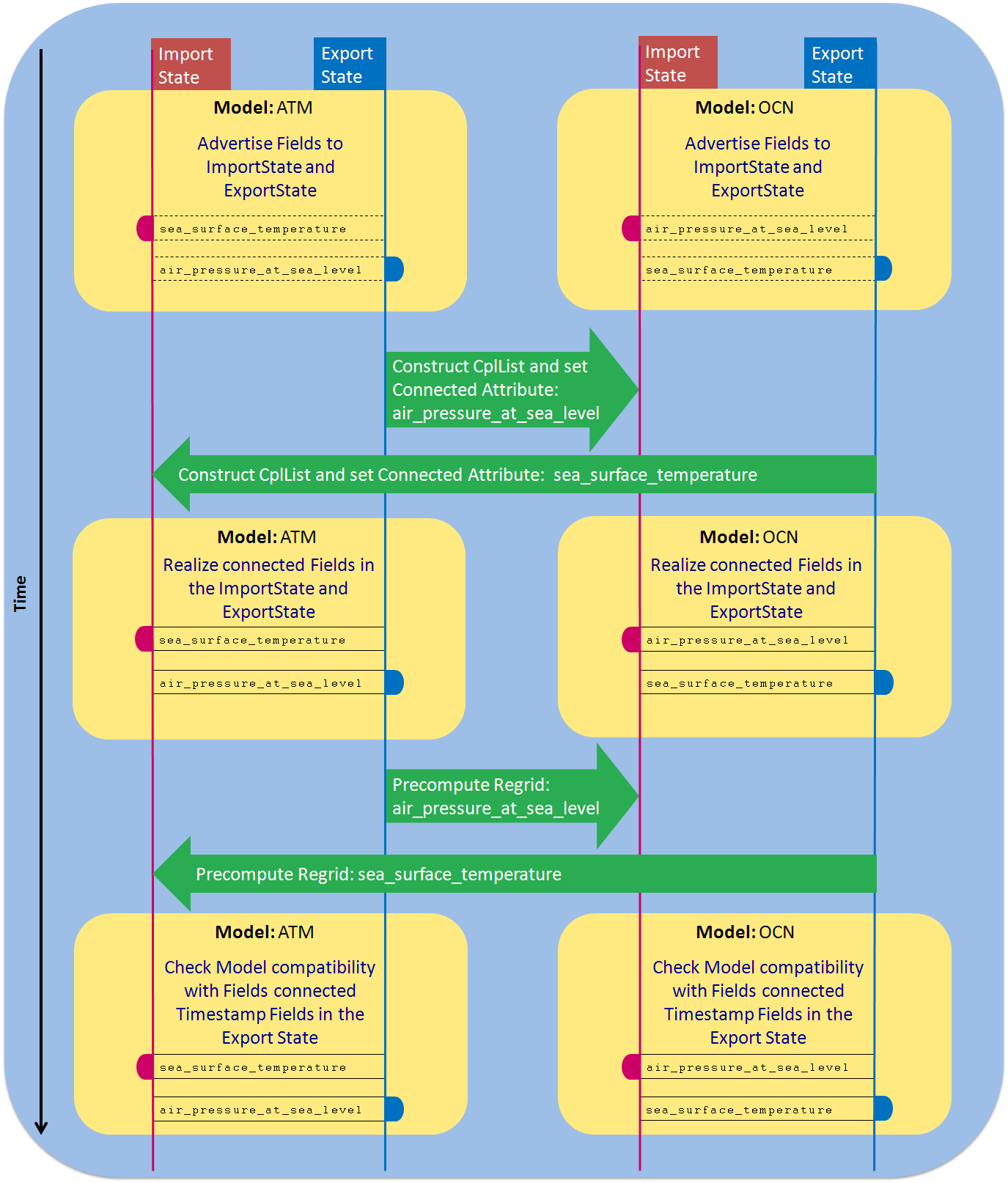 Typically the first action in the initialize phase sequence is for the Model components to “advertise” Fields in their Import and Export States. These Fields may be without actual memory allocations at this point, which is indicated by the dashed line around the Field boxes. The requirement is that the required NUOPC Field metadata is present. The generic Connectors use the advertised Fields to construct connection maps between the components.

In the next phase, the Model components use this information to “realize” connected Fields by associating actual memory allocations. This is indicated by a change to a solid line around the Field boxes.

The NUOPC Layer is capable of implementing many different coupling schemes. To do so, every NUOPC Driver component parameterizes the dynamic aspect of driving the Model components in the form of a derived type called NUOPC_RunSequence. Each RunSequence is associated with a Clock for its own time stepping, and a chain of RunElements. A Driver component can store multiple run sequences, and one run sequence can call into another run sequence. This allows the implementation of very complex sequences with multiple time scales.

The NUOPC Driver facilitates both sequential and concurrent execution of its children. The actual mode of execution between the children is determined by the combination of a technical and a scientific restriction. On the technical side, concurrent execution of any number of components is supported as long as they are all defined on mutually exclusive petLists. The petList of each child component can be set during an optional specialization of its parent Driver. As soon as two components share one common PET (Persistent Execution Thread) they will run sequentially, for the simple technical reason that a PET can only execute one stream of instructions at a time.

The NUOPC Driver instantiates every child Component as its own object. This means that multiple instances of the same Component are supported. For example the same ATM component code can be instantiated multiple times, each instance becoming an independent component object with its own private memory, data distribution and petList.

Being able to instantiate and manage the same component code multiple times within the same Driver can be leveraged in model ensembles as well as nested models. There are three nesting examples available: NestingSingleProto, NestingMultipleProto, and NestingTelescopeMultipleProto.

Another application of component hierarchies is that of interactive ensembles. Here multiple Model components (maybe multiple instances of the same Model, or instances of different Models) are executing while they may appear as a single Model to the outside. For example an ensemble of ATM Models may interact with a single OCN Model. In this case it may be very convenient to pack all of the complexity of the ATM ensemble into an encapsulating Driver component. To the outside, i.e. for interaction with the OCN Model, the ensemble component appears as a simple ATM Model.

This section contains descriptions and links to example codes that are available from the NUOPC prototype repository. The prototype codes demonstrate how the four building blocks of the NUOPC Layer can be used to implement a number of different architectures. For each architecture class the “relationship diagram” shows the number and types of components involved, and how they relate to each other. The “coupling diagram” shows the temporal aspect of the coupling between model components along the model time axis. In a coupling diagram the same connectors (green arrows) show up multiple times.

The sample prototypes linked on this page correspond to the ESMF/NUOPC 8.0.1 release. There are dozens of other documented prototypes in the repository!